Having built model railways as a hobby since childhood in the 1960s, I had the desire to produce realistic scenes around model railways in a compact portable space. I started with the typical Hornby 00 train set, which was developed into a layout which filled a room. When I came back to the hobby in the 1980s I worked with N gauge and then Z gauge to produce smaller pieces.

I wanted to start an online business and in 2008 began by selling small scenes for model railways on Ebay. Having had success with these, I made my first Z gauge layout in a small toolbox. This was a simple oval with scenery and a back scene. This sold fairly quickly, so I developed more complex pieces in small cases which also sold well, leading to my first commission at the end of 2008.

By September 2009, I was ready to launch Mountain Lake Model Railways as a business and began producing layouts for sale on Ebay and to meet a steady stream of commission orders. Many of these layouts are featured in the gallery. This web site is a progression of the business, showing what has been achieved so far and looking forward to producing more complex and challenging pieces which have already been described as works of art by some of my customers.

The central concept remains to produce small layouts in cases, which are both protected, easy to store and portable, enabling them to be shipped anywhere in the world,but larger pieces have been produced for customers. My aim is to work with you to bring the model railway scene of your dreams to reality. 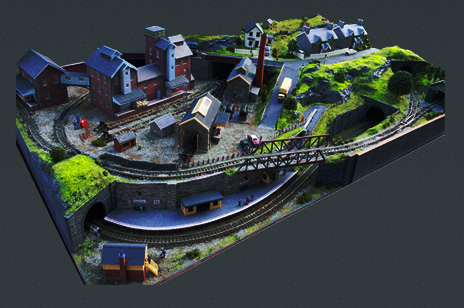